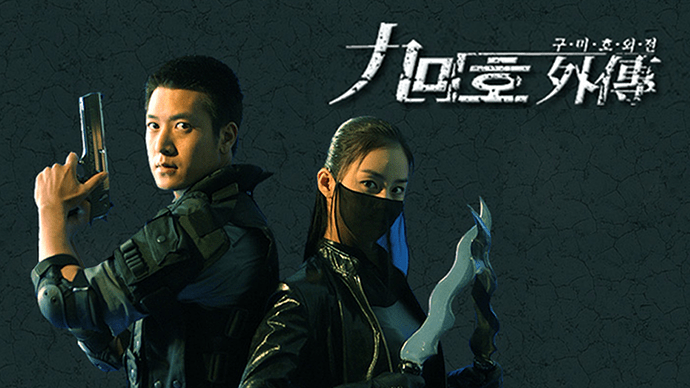 Kumiho - Forbidden Love is a http://www.kbs.co.kr/ drama series featuring the Encyclopedia Mythica in a greatly reinterpreted and changed form: apart from a few Supernatural aspects such as red glowing eyes at points, leaving fox claw marks in some cases, the magical weapons the guardians have, one character who can shape-shift, and the curse of having to eat human livers, the kumiho are more or less depicted as mostly human and hiding within human society with everyday lives.

The curse of eating human livers is one of the main plot points of the show itself which follows a team of guardians who are there to enforce the rules of the kumiho’s council:

Also running around is an incompetent task force (I forget what the task force is called) investigating the kumiho consisting of actors who look stupid and have no idea what they are doing. For instance there was a raid in which the team ran around a building some holding guns in one hand, others jumping around randomly, one guy jumping on a couch in the middle of a room and nearly toppling it over. Somehow this team manages to capture a kumiho and run tests on it, only to find that they are genetically identical to humans and one of the guys starts questioning the problem of what they are: Are they foxes in the form of humans?, Are they humans with fox souls?, Are they cursed humans? Unfortunately, this question is dropped after they discover that the kumiho apparently have tapetums and they can identify them that way.

The stupidity in the story is rampant, from the incompetent task force who can not grasp simple tactics like tailing suspects (in which case they would have found out that everyone they were watching/identified routinely went to the Natural History Museum a lot sooner)… to everyone forgetting that one character could shape-shift (even though they used it on missions)… to idiot cop’s wide-open apartment (every other time he came home someone was there, twice he was attacked. Now to me being attacked by assassins and having unknown people randomly in my apartment all the time would be a clue to ether move or lock the door).

The ritual costumes for the scenes in the temple and training dojo looked good as did the temple set itself which in the story was hidden in the Natural History Museum in Seoul… Somehow with a http://img.photobucket.com/albums/v497/RaptorRed/ScreenShots/TheRoof.jpg
.

Throughout all this is a slow moving tragic love story with a couple of intertwined triangles which was alright but generated some of the longer pointless scenes of characters with the annoying ‘romance scene song’ playing. These scenes would have been more tolerable had there been more than one ‘romance scene song’, which ended up being played several times per episode.

Be warned: It starts to get repetitive later on and it is very much a Christ Story (to the point in the ending the main character says she has a cross to bear before she sacrifices herself to lift the curse of the kumiho having to eat livers and more or less changing them to be like normal humans). Overall, I thought it was an interesting drama series notable for it’s interesting take on the kumiho and it’s soundtrack of about five songs which are played repetitively to the point that you want to jab out the speakers… There are special effects but their budget is mostly used up in the first episode on various pointless shots like a slow motion bladed yo-yo unleashing it’s blades and flying through the air. It has some good aspects and a fair amount of unintentional humor (which made it watchable for me).

Also don’t get this through Hong Kong, like I did, my DVDs came pre-scratched so that only a few very good quality DVD players could play them without serious errors.

lol, looks awful, but I must see it,
for it cannot be as bad as Ishtar,
and Yes, Loop watched Ishtar.