The Lazlowian News Agency has opened it’s offices today in Lazlowgrad and in several other cities around the globe. The Agency was created from the merger of the Lazlowian National News Service, the now defunct Lazlowian Telegraph Bureau and the Lazlowian Telecommunications Agency. The director of the Agency, András Zrínyi, in a press conference today commended the work of the old LNNS and expressed his belief, that the new Agency will perform even better at providing news both to the Lazlowian public and to the world.

The High Court of Lazlowia has found five members of the Vulshainian terrorist organization Green Paw, who were arrested in 2013, guilty on the charges of terrorism, incitement to terrorism and crimes against the order of the People’s Republic. The court has sentenced the defendants to death by hanging. The defendants have appealed the sentence, and the Constitutional Court will decide, if the appeal will be accepted. However the prosecuting attorney, Flórián Gaál, has told our reporters, that it is unlikely, that the appeal will be accepted. “We made a clear case, there are no questions left. At this point another trial would be a pointless delay, and we have already spent enough time on this trial.”

Green Paw is ostensibly a non-profit environmentalist organization that is based in Vulshain, and has offices in several countries. In 2013 however several members of the organization were arrested in Laiatan following a failed terrorist action and were sentenced to prison. It was after this, that the Lazlowian government banned the organization and the Lazlowian Police raided the offices of Green Paw in Lazlowgrad. The Police successfully uncovered the terrorist plot that the members of this criminal gang have planned and five members of the group were arrested while two others were killed while resisting arrest. Green Paw is now officially considered a terrorist organization by the Lazlowian government. The investigation has also made it apparent, that Green Paw has very close ties to the Vulshainian government and to the Vulshainian royal family, and it is also apparent, that the terrorist group receives its orders from Kitsuniva.

Race car drivers from around Lazlowia and other countries gather in Lazlowgrad to participate in the Lazlowia Grand Prix, which will be held this weekend. The race will be the first in the Tri-National Championship, which will also include the Algaisia Grand Prix and the Sevropia Grand Prix. The major automobile manufacturers of Lazlowia, Algaisia and Sevropia are all represented.

The team of LAUG, Lazlowia’s largest car manufacturer, is expected by most to win the race, but they have serious challengers. The Kolbász based company Léda, well know for its autobuses, has not only built a strong racecar, but has also signed on András Bozóki, who has already won two international races this year. Then there’s Red&Mer from Algaisia and its Type 3 engine, which is described as the finest among its competitors. Sevropia’s Durynsko Auto also has good chances, especially since they signed on last year’s winner of the Sevropian Grand Prix, Boleslav Pulkrábek, and the Lazlowian Auróra Szokola, the sole female contestant of the race.

The Grand Prix is also a boon for tourism. Lazlowgrad’s hotels are filled up and visitors from around the world are everywhere, to the joy of some and to the annoyance of others. The Lazlowian Police also has more work during this time, but so far no serious incidents have occurred.

Although only a few hours have passed, since the surrender of the last resisting Tolorian loyalists forces to the fascist rebels have been announced, the remnants of the Tolorian government, which has escaped to Lazlowia have announced to formation of the Tolorian Government-in-Exile. Eduardo Arriola Hiero, General Secretary of the Communist Workers’ Party of Toloria (PTCT), has been appointed Prime Minister, succeeding Álvaro Jimenez Gonzalez, who was reportedly killed by the fascists. Prime Minister Arriola in a speech, has called all Tolorians to resist the fascist junta and to take up arms against them. He also called the communists and socialists of the world to help Toloria in its darkest hour.

The Lazlowia Grand Prix ended today with István Barna of the Csepel Team winning the race. Second was Boleslav Pulkrábek of Durynsko Team and third was János Péterfi of the LAUG Team. The team of Csepel, the Lazlowian company known for making vehicles for the Lazlowian People’s Army, surprised everyone with not only wining the first place, but also the 8th place with Lajos Baumgartner. Durynsko and LAUG however performed as expected. The LAUG cars have lead the race for most of it, only falling back in the dramatic last lap. Pulkrábek drove evenly, with the confidence of a seasoned driver. Durynsko’s other driver, Auróra Szokola, who is only 19 years old, pushed her car to the limit and this has cost her several places, as she was forced to make repairs. Still, she came in 7th.

Red&Mer’s Robert Gutierrez was 4th and Boros-Marosi’s Jenő Hanák was 5th. Léda’s team however proved to be a disappointment, as their cars broke down almost constantly, with András Bozóki’s car finally giving up towards the final lap. Jakab Nagy, the team’s other driver, came in 6th, but his car also faced mechanical problems, and the teams definitely will have to address these issues until the next race of the Championship, which will be the Algaisia Grand Prix.

Comrade president Mór Preusz has left for Kralgrad, the capital of the People’s Republic of Sevropia for a conference with the leaders of Sevropia and the Democratic Republic of Algaisia. The main subject of the conference is the creation of a permanent military alliance between the three countries. Also on the agenda is the trade embargo against the Veridian Empire.

The spokesperson for the Central Committee of the Lazlowian Communist Party told us, that the military alliance has been in the making for a long time, but now it has become more urgent than ever for the leading socialist countries of the world to unify their forces, as they face the ever increasing threat of international fascism.

More Than Half Million Refugees Flee From White Terror in Toloria

Although only a week has passed since the fascist military junta has defeated the government of Toloria, they have already claimed infamy with the campaign of terror they have unleashed on the country suffering under the yoke of fascism. While there are no official estimates, reports suggest hundreds of thousands murdered already by the bloodthirsty militias of the junta.

In the same time more than 500 000 Tolorians have fled the country from this reign of terror, most finding refuge in Lazlowia, while others have escaped to neighboring countries. The Tolorian government-in-exile, which has set itself up in Lazlowgrad last week, is trying desperately to maintain contact with the refugees and to help them settle in their new countries. The Lazlowian government has also offered to help the refugees and has already set up temporary internment camps for the refugees, until more permanent accommodations can be found for them.

Comrade president Mór Preusz has returned from the conference held at Kralgrad, where he signed a treaty creating a military alliance between the People’s Republic of Lazlowia, the People’s Republic of Sevropia and the Democratic Republic of Algaisia. Officially called the Alliance For the Defence of Socialism (Alliance Pour la Défense du Socialisme in French, Szövetség a Szocializmus Védelmére in Hungarian, Aliance Za Obranu Socialismu in Sevropian) its goal is facilitate military cooperation between its signatories in preventing the spread of international fascism. The alliance is open to other countries, and comrade president Preusz has expressed his hope, that other progressive countries will join the alliance.

The three countries have also agreed to create a joint trade embargo against the Veridian Empire and the fascist military junta currently ruling Toloria, in retaliation for Veridia supporting the fascist military coup, that has take over the peaceful country of Toloria, and has unleashed a campaign of white terror.

This Thursday, July 21st, marked the 13th anniversary of the Great Socialist Revolution, when the people of Lazlowia rose up against the fascist dictatorship ruling the country and defeated it. This year also marks the 10th anniversary of the establishment of socialism in Lazlowia, as the nationalization of the industry and the collectivization of the farms created the first step on the road to communism. Throughout the county festivities were held to mark this occasion. In Lazlowgrad the annual parade was held, where the major state companies and state farms, as well as the Lazlowian People’s Army and the Lazlowian People’s Navy were represented.

As both Thursday and Friday were holidays, many people took advantage of the long weekend and went on a holiday. As a result of the increased traffic, the roads and highways leading to the most popular tourist destinations were jammed, but thanks to the preparations made by the police, there were no major traffic accidents. 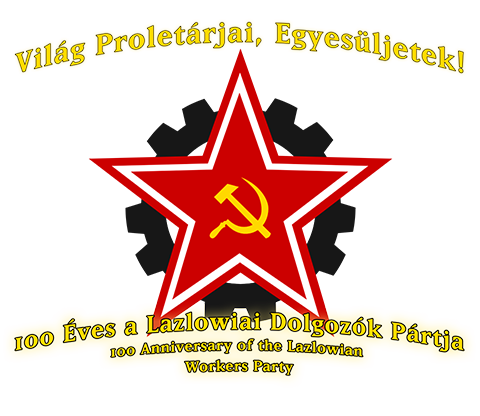 100 years. An illustrious history, that represents a glorious chapter in the annals of Lazlowia. A history of many trials and hardships, a history of many victories. It is this history, that the people of Lazlowia celebrate today, the 4th of April, which this year marks the 100th anniversary of the founding of the Lazlowian Communist Party, the predecessor of the Lazlowian Workers Party. Factory workers and miners, engineers and writers, students and teachers, the workers and the peasants, the young and the old all gathered today in this celebration.

But the forces of reaction have emerged from the shadows, where they long conspired, and in 1921 overthrew the republic. For decades Lazlowia suffered under oppression and terror. The Party could only operate in illegality. Many of our comrades had suffered martyrdom in the fight for freedom. But the flame of the workers’ movement was never extinguished by the reaction.

In 1965 the Party played a pivotal role in the Third Revolution and the establishment of the Second Republic. But this time, the bourgeoisie again pushed the communists aside. The result: poverty, decay, and ultimately the rise of the fascists. But while the elemental forces of the workers and peasants could be withheld for some time, it can never be stopped.

2003 and Glorious Revolution! The brightest chapter in Lazlowian history! We all know well the events, the fight, the triumph! The progressive forces of the nation, led by the communists have formed the Lazlowian Workers Party. Leading us ever forward, towards the glorious future of communism! The Party and the people: an unbreakable unity!

At the commemorative ceremony held at the State Opera House, Mór Preusz, President of the People’s Republic, said:

“In the past 100 years, the Party was constantly renewed by generation after generation. But the Party itself is eternal! It has led us, provided example for us, the fight and work with loyalty to the class, to the people. This fight we carry on today, to create a new socialist society!”

Foreign delegations from the People’s Republic of Sevropia and the Democratic Republic of Algaisia were also in attendance. Jana Zbranková, Chairwoman of the Central Committee of the Sevropian Communist Party also gave a speech:

"We look at the shining example, that our Lazlowian comrades gave us, with great admiration! It is their inspiring leadership, that leads us in our labor to build a better Sevropia. On this historic anniversary, we stand in unity with the Lazlowian Workers Party, and with the peace loving, progressive workers of the world!

Commemorative medals were presented to members of the Party, who during the years of oppression, worked with distinction for the Party.