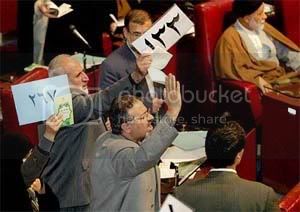 Senator Ramaba is heckled in the Senate Chambers

Administration Island, The West Pacific: Trouble is mounting today in The West Pacific, where a rapid succession of resignations in the Senate has shook the usually stable region to the core.

The early signs of the chaos had been a succession of personal attacks, baiting and petty bickering in the chamber, most centred around Senator Ramaba (Govindia) who had been facing disciplinary action for lying, and Senator Freedom and Pride. This had been going on most of the summer, which apart from that had been a good one for the region. Then on August 31th, Senator Ithania resigned suddenly amongst all the in-fighting, 'In my view, Im afraid this incident has proven how pathetically juvenile this little organisation can be and how many members seem to lose a little of their humanity when they role-play as legalistically minded, self-important Senators.

In true childlike fashion Im taking my ball and going home. I resign because I no longer wish to participate in this playground you call the Senate. I dont want to be part of anything thats this cold and rejecting, try to justify it as discipline if you must but Im afraid I cant stop thinking about the player that must be very hurt by all of this. I think Id consider myself a bad person if I didnt react in this emotive manner.’

This event had been largely passed over by the rest of the Senate, and warning signs largely ignored. However the petty bickering continued until two days ago Senator The Rose Resistance resigned, which was swiftly followed by the resignations of Senators Halmont and Limitless Events (personal reasons) but most shockingly, the greatly respected, long-time Speaker Enegro Montoya. This is an excerpt from his resignation letter:

Well all, I would love to say it has been fun, but it hasn’t. The hallowed chamber has turned into a very muddy and nasty place, and there is really nothing I can do to stop it.

Frantic discussions are now being held to try and fix the problems that have beset the region, these include censoring Senators Ramaba and Freedom and Pride and restructuring the whole Senate altogether. All resigned or inactive Senators have been given until Wednesday 26th to come back by interim Speaker, The Realm of the Realm, or they will be removed from the rolls. However considering that the majority have joined the new Town Council, the chances of this happening seems unlikely.

Written by Emperor Matthuis
Editor of The Northern Telegraph
Editor-in-Chief of The NINN.