Crown Land of Ny’Tewien (NOR)

Marium I, Baroness of Terwenia (KVC)

The island of Ny’Tewien is believed to have been settled by Akuan Kemonomimi in an era predating historical records, having established early settlements in the rich farmland around the coasts and centre of the island. For the majority of its history, the island was virtually isolated, with minor exceptions for trade vessels and visiting brewmasters from the mainland.

Eyjarian vikings came to Ny’Tewien in the early 12th century, finding average quality soil and little anything else. Establishing a small village of Bridgsby to act as a raiding outpost for their pillages into mainland Borea. The vikings had very little interaction with the natives, besides demanding tribute from the natives. The natives, misunderstanding the vikings as shipwreck survivors, believed the ‘tribute’ was simply providing assistance to the settlers.

In the late 16th Century, following on from their earlier conquest of Vorpest, officials from the Vistari Rijk arrived on the island to survey it, finding a considerable amount of usable slate on the coast. A Vistari plaque was installed on the southern coast of the island, and a slate quarry was established - populated by a small number of Qalbta and indentured Vistarian labourers. There were only intermittent interactions between the quarrying community and the other groups on the island, besides minor disputes including the removal of the plaque by natives for use in creating a plough - only to be replaced by a guard tower.

As years passed, viking settlers continued taking tribute from the natives as the Vistari gained more and more control over the island, establishing a small colonial government and forcefully collecting “taxes” from the natives - who accepted the practice as another form of charity. Limited taxes were taken from the Eyjarians, sparking a number of piecemeal conflicts between the settler groups.

By the late 1700s, slate from the island began to decline in demand, and the control of the island began to slip further into informal, land-owning Vistari and Eyjarian families as well as the natives. There remained serious disputes and disagreements between the Vistari and Eyjarians in several areas relating to taxation, property ownership, fencing off of areas and government. An informal meeting was held between the two settler groups to hold a discussion on the matter, with representatives of the declining Colonial Government representing the Vistari and the loosely-defined elective Jarldom representing the Eyjarians. Notably the native population was not representatives nor any of its members invited to the meeting. While the topic of governance nor who officially owns the island was never agreed upon, it was decided that taxation would not be held on disputed lands until both sides can come to an agreement and divide the island up between the two groups. The document completely forgot or intentionally omitted the largest population on the island, the native people, and both settler groups failed to inform them of the agreement.

This resulted in several accidents where native people encountered fenced off areas on land they had sheep grazed on for millennia. The native Kemonomimi tore down the fences, using the wood as fuel for fires as they did not fully understand the idea of “private property”. This ended with several occasions where the settlers chased off the natives with firearms, granting the agreement the colloquial name “The Edict of Bloody Barricades” after the fences often left stained with blood as a warning to other natives. Such brutal reprisals started a series of further disputes between the colonists and the native Akuanists.

The natives began a passive resistance, and wrote formal letters asking the colonists to leave the island. Neither the Vistari nor the Eyjarians could read Nys’tat’en and according to historical records at the time, didn’t feel any desire to read the letters regardless, burning most of the written documents sent.

Following an uneventful period of separation amongst the different communities, in 1983, Torwald Hákonsson, a large Eyjarian landowner and critic of the Jarl currently elected to lead the Eyjarian settlers, rallied various other small landowners to start to circumvent the Jarl by putting their ‘property’ to sell on the market. The Bjørn Family held a special interest in the native Akuanist culture there and wished to establish it as a reserve for native culture. Through the Bjørn Trust, they bought available land as it came to market. The Bjørn Trust established a resettlement fund for the Eyjarians and Vistari peoples on the island if they wished to move out, though many refused and stayed entrenched in the villages they had resided in for generations. In addition to the resettlement fund, the Bjørn Trust established a clinic on the island for the native people, providing funds for development native farms and villages. The clinic was the first instance of modern healthcare given to the native kemonomimi population. It has been an annual tradition for a member of the Bjørn family to visit the island, usually to very little fanfare.

In 1984, what remained of the small Jarldom of Teweyj, comprising the remaining Eyjarian landowning families who did not agree with Hákonsson, requested the Eyjarian government to officially make their lands to be part of Eyjaria itself, after Jarl Tor of Teweyj found himself indebted to the Eyjarian government and became desperate to be bailed out. Soon after, the remaining Eyjarian settlers organised themself to form a local democratic government. The social democratic Eyjarian government created new settlement and aid programs designed to encourage Eyjarian migration to the island, though such efforts would prove unsuccessful. The Government also started a series of subsidies for local industries and introduced the Eyjarian welfare system into the Island. The Eyjarian Prime Minister, Torunn Æretter, visited the Island a year later in a show to strengthen the cultural and economic ties between the island and Eyjaria, further escalating debates on the island’s ownership.

In 1986, with Eyjarian settler groups split in twain and moving to selling the island and therefore breaking down prior agreements, the officially “colonial” government established by the VCC began to demand a reassertion of the claim detailed in the Slate Tower Plaque. The Vistari Government, legal successors to the VCC in matters of sovereign territory, asserted their legal claim to the island as a part of the Dominion of Vorpest as per the 1929 Vorpest Act. As such, they sent a small fleet of ships to reassert the claim and reform the territorial government, maintaining a minor patrol boat station on the island as an affirmation that the previous purchase agreements would not be recognized and the territorial waters would be treated as Vistari, though no blockade was enforced. As such, the island remained as it had before in some ways, with often poorly defined areas of control marked by the influence of different governments each claiming to represent the island as a sole entity - defined on different legal and historical bases.

In the current day, the dispute is still on-going within the international court. What started in 1986 remains a topic of contention amongst otherwise relatively aligned nations, and resolution does not seem on the horizon. 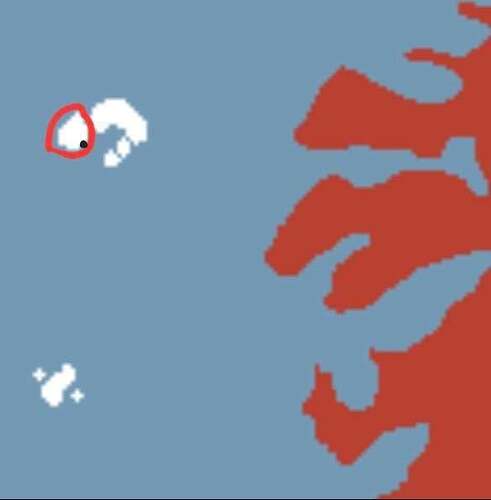 Following a vote on 31st December 2022, this nation claim has been APPROVED by a vote of 5-2-0. Further votes will be amended to this post as they come in.