Motto: For the People, the Nation, and the Republic!
National Animal:
National Flower/Plant:
National Anthem:

Historical Summary:
The northern part of what is now Hustreache was originally settled by Kemonomimi in antiquity, and was originally part of the confederation of Ny’Andrestopp.

When the viking host of Børre Fuglestad attacked Ny’Andrestopp in the 900s, the Ny’Sænuri clan was successfully able to repulse the host. Reeling from their losses, the host retreated south until they found a bay that was a safe distance from further reprisal from the Ny’Sænuri and set up camp there, creating what would eventually become Westhavn. With Børre dead, the battered host consolidated itself around his surviving son, Harald Fuglestad, who declared himself King of Kystriket (literally meaning “coastal realm”).

The Kingdom of Hustreache took the form of an absolute monarchy, and repressed any calls for the democratization of the state, as well as violently persecuting against any Akuanist worship. Hustreache existed in this way under Fuglestad rule for slightly over a millennium. For most of its history, Hustreache was largely friendly with Norgsveldet, and aided the Norgsveltian colonization of Ymirland, as well as siding with the Fylkir during the Ulvriktruar Wars of Religion against those that continued to back Gothiric Asatru, namely the Kingdom of Tretrid.

The Hustrian Republican Front (HRF) was founded in 1851 as an underground group dedicated to the overthrow of the monarchy as the result of the merger of various anti-government groups, from kemonomimi fed up with the continued repression of their culture to those who demanded the democratization of Hustreache. With the start of the 20th century and the creation of Hirdism as an ideology, the HRF started to split ideologically between its left wing, which demanded pluralism and freedom of religion, to the increasingly Hirdist right wing, which favored nationalism and state atheism.

King Eric IV brought Hustreache into the Great War on the side of the Imperial Powers in 1915. While the conflict was nowhere nearly as long or devastating for Hustreache as it was for most of the other participants in the war, the political and economic shocks would destabilize a power base already gradually chipped away by the HRF’s campaign of subversion. This would reach a head two years after the end of the Great War in 1919, when the HRF actively rebelled against the monarchy, proclaiming the Republic of Hustreache, and a large chunk of the military mutinied with it, starting the Hustrian Civil War.

The Hustrian Civil War would last until 1923 with the evacuation of the last Royalist Forces to Norgsveldet. Shortly after the end of the war, Eric IV and his family, who had been captured by republican forces during the course of the war, were tried in a kangaroo court, convicted, and then publicly hanged in the city center of Vesthavn.

The HRF held a constitutional convention that lasted from late 1923 to the summer of 1924, with the two wings being forced to compromise with one another to prevent the onset of a second civil war. The Hustrian republic took the form of a one-party state under HRF control, and with all forms of religious worship, whether Ulvriktruar or Akuanist, forbidden.

A series of reforms happened over the course of the 20th century that made Hustreache increasingly moderate. The one-party status of the HRF under the constitution was ended in 1931, after which the HRF’s two wings split into two parties, the HRF (L) and the HRF (R). The strict ban on religious worship was also lifted in 1946, though Hustreache remained and still remains state atheist. Hustreache’s liberalization has also led it to engage more actively with a less hostile world.

To defend itself from hostilities with Norgsveldet, Hustreache aligned itself with Morstaybishlia, eventually becoming allies with the superpower.

When the Auroran-Cerenerian War broke out in 2017, due to its alliance with Morstaybishlia, it joined the war on the side of the Bursil Accords. After a series of talks, an agreement was signed between Hustreache, Mexregiona, and Tretrid creating a unified command for Novaran soldiers deployed in Aurora for the ACW called the Novaran Joint Expeditionary Force (NJEF). These series of conferences slowly expanded in scope from simple military cooperation, and eventually involved three nations not involved in the ACW, including Celanora and Lapinumbia. The product of this was the Sixfold Treaty, which established a permanent body, consisting of one representative for each of the six members, named the Novaran Council. The Novaran Council was tasked with determining the structure of and writing the charter of an organization for pan-Novaran cooperation, eventually producing the League of Novaris. 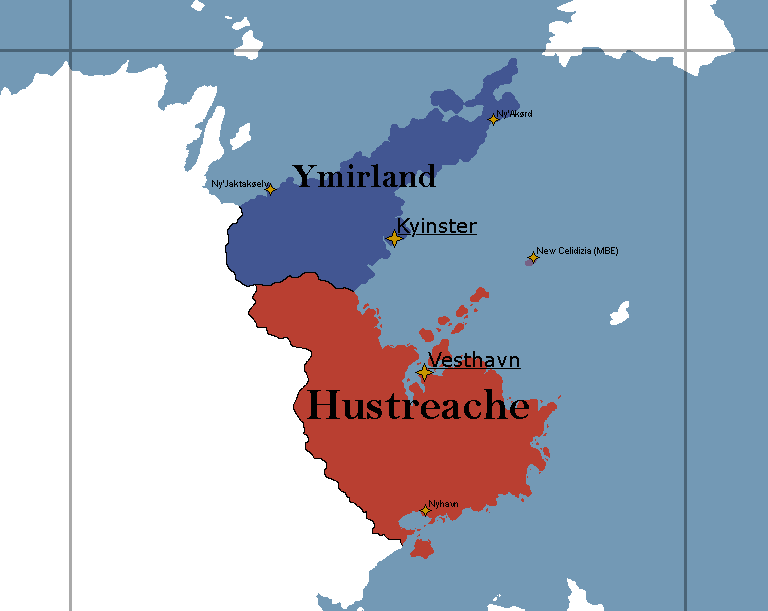