The Republic of Nahris/Nahrin Union 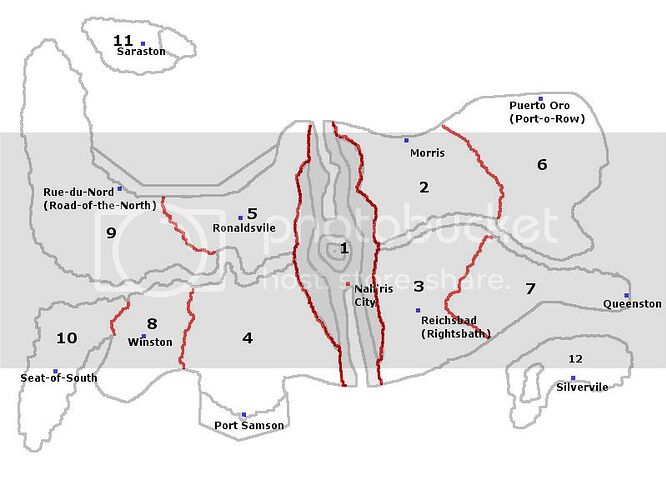 [ol]
[li]Nahris County
[li]Morris County
[li]New South Germany County
[li]Samson County
[li]Ronald County
[li]Hispana County
[li]Queen’s County
[li]Winston County
[li]Franco County
[li]South County
[li]Sara Autonomous County
[li]Silver Autonomous County
[/li][/ol]The Republic of Nahris, also known as the Nahrin Union, is a small island unitary nation that is located in the south western part of the East Pacific. The nation is known for being fairly isolationist and neutral, preferring to stay out of others affairs and maintaining a tight grip on its own. The population mostly consists of descendants of ancient Nahrinese people that used to live on nearby Dannistaan before emigrating east onto what is now modern day Nahris. The country is run as a unitary nation and consists of 12 counties, 10 standard counties and 2 autonomous counties. Although democratic it has some strict laws and is quite vehement in enforcing them.

The Government is structured as a parliamentary republic with elements of a semi-presidential system. The President of the Nahrin Union is a mostly ceremonial figurehead but has some important reserve powers. Most of the day to day business of Government is performed by the Prime Minister of the Nahrin Union and his cabinet. They both are held accountable to the 400 member National Assembly, the legislature of the Nahrin Union. The highest judiciary in the land is the Nahris Supreme Court, which provides the final interpretation of a law in any appeal case. Elections are held every 4 years on a fixed term.

History
The modern Nahrin nation was previously founded as a loosely allied group of kingdoms, fiefdoms and tribes which were in perpetual war with one another for several centuries. The first signs of a more cohesive state occurred around the 1600’s, when some of the larger kingdoms and fiefdoms started amalgamating the smaller kingdoms by economic, political or violent means. In most case, violence and coercion was used. This reduced the number of kingdoms from 150 to around 36 in the 1700’s. In an attempt to better pool resources to make the Nahrin kingdoms more of a regional political power, the kingdoms agreed to a union which would see a large joint royal family run the entire island. Thus the Kingdoms of Nahris was born.

The new merger benefited the inhabitants well initially. Trade with other nations picked up, especially larger international partners like the British Empire. However, politically, things were very old fashioned, with absolute power being retained by the Joint-Nahrin Monarchy. Executions for insults against the monarchy were common and many were jailed for the lightest jibes at the Royal Family. This had continued long into the early 20th century, were international wars and local famine started rumblings of discontent amongst the populace.

Eventually, in 1939, one of the leaders of the Trans-National Imperial Nahrin Army, one General Alan Theodore Smyth, lead a popular uprising against the royal families, forcing several members to flee. Many more were arrested, captured and executed or imprisoned for oppressing the general public. However despite the promises of freedom and democracy, after the coup, General Smyth banned all opposition against him shortly afterwards in 1940 and imposed his own brand of law. The nation was renamed the People’s Free Democratic Republic of Nahris and the 36 kingdoms were amalgamated further into 12 counties. For several years afterwards, General Smyth ruled with an iron fist, banning more activities than the royal family did. Being a staunch Catholic, he also believed he was performing God’s will and forcibly converted many of the populace to Catholicism, even those who were of a different religion. His oppressive rule lead to him being excommunicated from the Catholic Church, which only angered him and convinced him further that he was the rightful successor to the Papacy. He declared himself pope in a bizarre and lavish ceremony in 1963, declaring a new branch of the Catholic Church in the process.

Despite his rule, he never officially named himself as the nations head of state. Only in his last few years of rule did he give himself such a title. In 1969, General Smyth declared himself President for Life in another lavish ceremony held at the old royal palace. Despite his claims of liberation from the royal family, his rule was oppressive and ultimately lead to the deaths of millions of citizens through neglectful economic policies and capital punishment of political prisoners. For a long time though, few dared to challenge him.

It was only in 1974 that one particularly disillusioned army officer, General Jim Jones of the now renamed People’s National Army of Nahris, opened declared Smyth a traitor and enemy of the state and led a violent coup against him. Thought it initially failed to unseat Smyth, and lead to a counter campaign where Smyth had Jones declared a terrorist, Smyth was eventually arrested when several key members of the army and soldiers loyal to them sided with Jones and surrounded the palace. Jones was then declared Acting President. As one of his first acts of governance, he had Smyth put on trial for treason. Smyth was found guilty of all 50 charges and sentenced to death. In May 1975, he was hung and Acting President Jones abolished the death penalty and held fresh elections shortly afterwards. The nation was once again renamed to the Republic of Nahris with Nahrin Union as a second alternative name.

Politics
The Nahrin Union is run along the lines of a parliamentary republic although with elements of a semi-presidential system. The sole legislative body is the 400 seat National Assembly, from which is drawn the Government consisting of a Prime Minister, a Depute Prime Minister and usually around 10 members of the National Assembly to make up a Cabinet, in which is vested Executive powers. The main Judicial body is the Supreme Court of Nahris.

Theoretically, the highest politician and leader in Nahris is the President, currently Emma Jones. The President is officially the guardian of the Nahris Constitution and has the right to revoke any law that is seen to violate any article of the constitution. In practice, this is decided by the Supreme Court of Nahris. The President also has powers to establish and break off diplomatic relations with other nations but again in practice this is done by the Prime Minister on the President’s behalf.

Local Government in the 12 counties consists of a single County Council which oversees and carries out any policies as set out by the National Assembly and Cabinet. Ten of the mainland counties have limited powers with regards to varying legislation to suit local needs and views via bylaws while the Sara and Silver Autonomous counties have more say in what laws are implemented due to their distance from the mainland as well as being allowed to implement bylaws in other areas normally reserved to the National Assembly. A review of political powers to be carried out by the time of the next General Election in 2014 is looking at reforming local government including abolishing one or both of the autonomous counties to bring local bylaws into line with national policies.

Political Parties[ul]
[li]Nahrin Liberal Union - Current leader Kenny Cuthbert. The ruling party of the Nahrin Union. They have been in Government continuously since the establishment of democracy since 1975. They officially consider themselves “beyond old fashioned politics” but are considered to be a de facto Centre-Right party with “Third Way” elements. The party is also unusual for the fact that it prefers not to be referred to as a “Political Party” but a “Political Union”. The NLU sees itself as a benevolent benefactor of the populace however many do not agree with it’s views on birth control, strict regulation of religions and economic policies. However despite the criticism, the party has enjoyed a continuous majority of 65% average.
[li]Nahrin Democratic Party - Current leader Daniel-Marcus Anderson. The main opposition party to the NLU. Considered to be Centre Left. It had it’s greatest success in the 1997 General Election, where it got 42% of the vote due to a scandal involving an NLU candidate. They have not been able to capitalise on this though and in the last two elections only managed 24% and 10% of the vote. They have also suffered from decapitation tactics caused by allegedly gerrymandering of electoral districts by the ruling NLU, the most notable being the loss of the NDP’s last leader, James Gerrald Clegg, whose electoral district of West Rightsbath was abolished and divided between two new districts of Rightsbath Northwest and Rightsbath Southwest. His attempt to contest the latter ended up with him losing to an NLU candidate. The election of the current leader, DM Anderson, marked the start of a change in NDP policy, as Anderson started to move the NDP more towards Third Way policies, much to the disgruntlement of the core NDP support. Rumours of a split mean it is likely a new party formed out of traditional NDP politicians and supporters may result.
[li]Nahrin Green Party - Current leader Joanna Hutchinson. Mostly involved with environmental issues.
[li]Communist Party of Nahris - Current leader Michael Juiper. A small communist party with very little following.
[li]Nahris Free Coalition - Current leader Michelle vonHamburg. The closest thing to a pro-business conservative party in the Nahrin Union.
[/li][/ul]